Chamalien has a slim body that resembles a large purple salamander with darker purple camo-esque spots all over his body and a short tail. He wears a black helmet[DJW 2] with three triangular colored lenses, the left one being blue, the right red and the middle green, which hide his three eyes. The helmet also has spike-shaped fin on the back of his head. He has four-fingered hands and three toes on his frog-like feet. He also has a wide mouth with sharp teeth.

Negative Chamalien looks just like Ben's Chamalien, except all of his eyes are red and he lacks an Ultimatrix symbol. 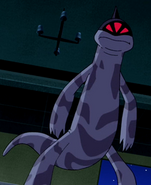 Chamalien's main ability is his camouflage, as he is capable of blending in with the color of his surroundings with such effectiveness that he appears invisible.

Chamalien is very agile, quick, flexible, and can climb walls and crawl on the ground with ease.[2] He also has sharp teeth and claws.

Chamalien's body is highly slippery and smooth, making him very difficult to grab.[1]

Chamalien has a long, retractable black barb that can come out of the tip of his tail; this feat was exclusively demonstrated by Prisoner 775.[1]

Chamalien has enhanced strength, enough to push a car and a huge truck several yards away and defeat a Vulpimancer in battle. He is also durable enough to withstand being thrown against a car; both of these feats were also only demonstrated by Prisoner 775.[1]

Chamalien can easily be tracked by Vulpimancers using their enhanced senses.[1][3] He can also be tracked by Anodites through his mana.[4]

Although Chamalien appears to turn invisible when he camouflages himself, he actually just changes his color. Consequently, his shadow can still be seen and any place filled with too many bright lights can be a disadvantage, as demonstrated with Prisoner 775.[1]

Chamalien's camouflage can also be rendered useless if he is either carrying something or coated in another material such as powder[3] or oil,[5] as demonstrated with Subdora.

Chamalien's name is portmanteau of "chameleon", an animal capable of changing its color, which alludes to his ability to camouflage himself, and "alien", a reference to Chamalien being an extraterrestrial life form, as well as a transformation.