Start a Wiki
watch 01:51
The Loop (TV)
Do you like this video?
Celestialsapiens (A play on "celestial," meaning from the stars, and "sapien," a term for intelligent) is the species of Alien X from the Forge of Creation.

Celestialsapiens are fairly simple in physical design. They are silhouette-like humanoids that can range from any size. They have white star-like dots scattered inside their body and three trident-like horns on their forehead. Their face only consists of pupil-less eyes. Celestialsapiens are also like humanoid-shaped containers full of a chunk of outer space. Celestialsapiens are huge in size, but Alien X is regularly shaped. A baby Celestialsapien is the size of a human fetus, for some reason. Likely because of their powers they can be at any size they want.

Celestialsapiens have a very strong ability to warp reality, meaning their thoughts can come to life. They apparently are able to alter time, space, and dimensions. Their reality warping is so powerful, that the personalities can even prevent the Celestialsapien from being destroyed just by agreeing that it won't. According to The Forge of Creation, Celestialsapiens can also use flight. Even with these great powers the Voice of aggresion and rage, Voice of love and compassion and the Voice of reason must agree in a two out of three in doing even simple movement. 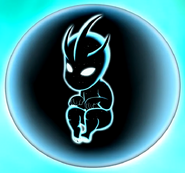 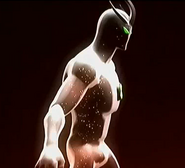 In Alien Force
Add a photo to this gallery

Start a Discussion Discussions about Celestialsapien