Cash Murray is one of Ben's former school bullies.

In the original series, Cash was taller than the other kids at his age. His skin also had a darker tone and his hair and eyebrows were all black. He had a football ball-shaped head with large ears, and his eyes were brown with a thin outline. He wore a grey shirt with blue accents and with a light blue cash register on it, and blue shorts with white shoes.

In Alien Force and Ultimate Alien, Cash almost looks the same as his 10-year-old-self, except his skin is now lighter and his eyes are black, matching the color of his hair and eyebrows. The outlines around his eyes are thicker, he has a red shirt with dark grey accents, and black pants.

In the same episode, he was seen in his underwear, which consists of red boxers with white lining.

In Ben 10 Returns: Part 1, his soccer clothes consisted of a red jersey with a black outline and the number 8 on the front as well as black shorts.

Cash in his underwear in The Unnaturals 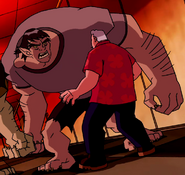 Cash as a troll in Perfect Day

Cash in Destroy All Aliens 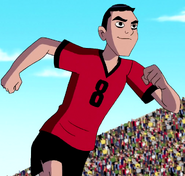 Cash was initially a ruthless and mean-spirited bully who, along with J.T., used to pick on Ben Tennyson. However, in Alien Force, he redeems himself after being freed from the Techadon Robot Gauntlet.

He first appeared in And Then There Were 10 where he and J.T. are bullying a boy when Ben intervenes. Ben along with the boy were hung on a tree by their underwear. Later on, Ben as XLR8 returned the favor.

He later appeared in The Unnaturals with J.T. as Ben's local little league baseball player having gotten in as a result of four other members getting chicken pox, but got kidnapped by the Squires. Ben saved them and destroyed the robots. He took credit on saving the President but while he was giving a speech about bravery, Ben as XLR8 gave him a wedgie.

Cash later appeared in Ben 10: Alien Force when he tried to bully Ben. Ben almost used the Omnitrix on them, but said "You know what, you're not even worth it". Ben stood up to his old bully, telling Cash that it's sad that everyone grew up except him; that he still has to make others miserable to feel good about himself like when he was 10. This caused the other teenagers to laugh at him. Cash got angry at that and tried to show off by towing Kevin's car towards a pit. However, Kevin soon notices, and chases after them (J.T. and Cash). Some odds and ends fall out of Kevin's trunk. In a panic, Cash ran and told J.T. to grab something. J.T. ends up taking a Techadon Robot Gauntlet, puts on and pretends to shoot a laser beam, only the Gauntlet really did shoot a laser beam. This got Cash interested and removed the Gauntlet from J.T. to take revenge on Ben for what he did. J.T. becomes worried because it seems as though Cash wants to really hurt Ben, so he warned Gwen and Kevin about Cash wanting revenge against Ben (although not telling them about the gauntlet). Kevin went after Cash but got defeated by Cash's new powers which were growing. He then tells Kevin to tell Ben to meet him at the Mr. Smoothy stand. Later at the stand, he challenges Ben, but Ben transforms into Chromastone. This easily gives Ben the upper hand. Ben then told him to give up, but Cash says he can't stop (the Techadon Robot gauntlet was taking over more of his body). However, when J.T. told him that a hunk of metal shouldn't control him, Cash turned it back into a gauntlet and J.T. pulls it off.

In Fame, Cash and J.T. appear near the end of the episode applauding Ben for his newly revealed hero status.

He and J.T. appear again playing a major part in Reflected Glory. They start a blog saying that they're the masterminds behind Ben 10 and succeed in convincing Ben, Gwen and Kevin to play along. When Psyphon shows up trying to destroy them, they soon realize that they don't want to be so famous anymore. At the end, even though they gave up their fame they suddenly want it back after they save Ben using an energy decoupler to drain Psyphon's power, but at the cost of draining Oliver's camera too, resulting in no-one believing they were the ones who beat Psyphon.

Retrieved from "https://ben10.fandom.com/wiki/Cash_Murray_(Classic)?oldid=1137376"
Community content is available under CC-BY-SA unless otherwise noted.