Carl Nesmith, also known as Captain Nemesis and temporarily known as Overlord, was a famous super-hero, as well as a great American icon and Ben's idol, but in reality, he is just a selfish fame-seeking fraud and is currently a super villain and one of Ben's enemies.

Nemesis in general has short black hair, a pencil-thinned mustache, and fair skin.

In Ultimate Alien, he wears a black body suit for the base of his armor. The armor itself is orange and black, with the chest having silver on the sides, and orange and silver gauntlets. The helmet is also orange with black lining and yellow square patterning.

In Catch a Falling Star, Nemesis wears a typical orange prisoner suit. After undergoing cosmetic plastic surgery, he no longer sports his mustache, has bigger lips, and his hair is slightly longer on the back.

In Omniverse, Nemesis is slimmer than in Ultimate Alien. He regains his pre-surgery appearance, his hair is in a fancy style, and he wears a black tuxedo with an orange tie and glasses. His mustache is much thinner than before.

While Nemesis was part of the Vengers, he now wears an armor similar to his Ultimate Alien one, but made by Billy Billions. The upgrade consisted now of the same body armor, but now he has black stripes on his helmet and upper chest, additional black armor on his gauntlets, and a yellow visor.

Captain Nemesis is most notable for his symbol, which is an orange/yellow 'N' over a black circle.

Carl five years prior to Omniverse 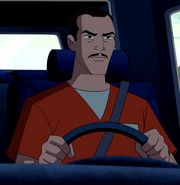 Carl in a prison jumpsuit in Ultimate Alien 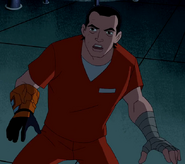 Carl without armor in Omniverse

On the outside, Carl Nesmith was a true hero. He spent decades of his life saving people from criminal activity, and is everyone's hero, even Ben's, who has Nemesis' poster on his wall. As a hero, Nesmith was brave, selfless, and cared about others. In Ben's eyes, Nesmith was "the coolest guy in the universe".

Unknown to others, Nesmith is actually a self-centred glory-hound and fraud, who stages the crimes he stopped in order to get glory and attention. If necessary, he allies with others, until he has no use for them anymore. However, dialogue from his assistant Simons implies that Nesmith was a genuine hero before. Nesmith cares little about actually saving and helping people and only seeks to receive attention and fame even at the cost of others, specifically Ben. Despite this, he chose to portray Ben as being misguided instead of a delinquent when the anchorman Will Harangue labelled him as such.

Nesmith also enjoys making fun of those he dislikes, as he kept calling Ben names such as "Ten Bennyson", though this could also be a result of him not bothering to remember his name.

Nesmith is a hothead with something to prove and is used to being in charge.[2][3]

As Captain Nemesis, Carl Nesmith had been active as a hero since a long time ago (According to him, before Ben was born). A famous superhero and a great American icon according to most characters, his long services made him rich and famous, having his own weapon-making company and comic book series. In reality, Nesmith had secretly staged all the criminal activities he seemingly stopped in order to get all the fame and fortune, though his agent implied he was a true hero in the past. Unlike Ben, he is shown to be greatly admired by Will Harangue, who described him as a "true American hero."

In The Vengers, Kangaroo Kommando tried to explode a bomb on a building. As soon as Captain Nemesis appeared, everyone started celebrating him, even the 11-year-old Ben Tennyson. While he was interviewed by Will Harangue, Kangaroo Kommando became angry because nobody was listening to him and he exploded the bomb. The people, however, were saved by XLR8. Seeing XLR8 get all the attention, Nemesis grew jealous.

In Hero Time, Captain Nemesis organized a fake kidnapping on Jennifer Nocturne in order to save her and make a come back to front page news. However, the fake kidnapping was almost entirely stopped by Spidermonkey before Captain Nemesis arrived, causing Ben to get most of the credit. This, plus Jennifer kissing Ben in front of the media, caused Captain Nemesis to grow jealous of Ben, despite Ben's admiration for him. After a second attempt to get back credit was again unwittingly spoiled by Armodrillo, Captain Nemesis proposed a "friendly competition" between the two of them to see who was the best. Though he was able to win one test thanks to an Ultimatrix malfunction, he ended up being humiliated by Four Arms, ruining his image.

After his defeat, Captain Nemesis was jealous and rancorous toward Ben, and upgraded his armor in a dangerous way in order to get revenge on him. He then kidnapped Julie and intercepts Jennifer's helicopter. He used them to bring Ben to him for a rematch. After a fight with Ultimate Humungousaur, Captain Nemesis endangered Julie and Jennifer's lives to force Ben through a "no-win" situation game. Ben used Goop to save Julie, while Gwen and Kevin saved Jennifer. During the fight, Captain Nemesis expressed disgust and disillusionment for having "wasted" his life saving pathetic souls like Ben, and renamed himself Overlord, stating that Captain Nemesis was dead (even though everyone called him Captain Nemesis). However, Ben as Water Hazard was able to defeat him. He was then arrested by the police.

In Catch a Falling Star, Nesmith escaped from federal prison with aid from Jennifer Nocturne and wanted revenge on Ben. He and Jennifer went to a motel were Jennifer dyed her hair black. Later, Nesmith confronted Ben and he engaged in a hand-to-hand battle, with Nesmith losing to Ben as Clockwork, until Jennifer shot down the latter with Nesmith's laser glove. Nesmith and Jennifer later went to a veterinarian named Dr. Pervis to get Nesmith plastic surgery. Nesmith killed Dr. Pervis afterwards, and later on the road he killed a truck driver and left a letter to Ben stating that he was going to the Nemesis Corporation building.

At Nemesis Corporation, Nesmith wounded and killed some police officers. He reached the elevator and entered a code to take Jennifer to a secret floor where he activated a large mech suit but was interrupted by Ben and Gwen. He then attacked them with his gauntlet, injuring Gwen in the progress. Ben then transformed into Eatle and defeated Nesmith, causing Jennifer to take control of the mech suit and beat up Eatle. After Jennifer was defeated by Gwen, Nesmith surrendered and gave himself up to the police, but not before telling Jennifer that they can still be together.

In The Vengers, Carl met Kane North outside of prison, and presented a new entrepreneur: Billy Billions, who wanted to form a group with them. With Billy's help, they both got new and more powerful armors.

After the Vengers became more popular than Ben himself, he and North started to compete to see who was the most popular. It just got worse when they all wanted to rename the group, and ultimately led to the Nemesis Tower and the Billions Tower shooting at each other, with Ben going back into action to stop them. However, this battle was transmitted live by Harangue which caused all of Bellwood to know the truth about the Vengers. When the police arrived, the whole group escaped.

As Captain Nemesis, Carl uses a powerful armored battlesuit. However, the armor was so complex that he needed his staff of technicians to put it on. The armor enhances his strength to a higher level, enough to lift a railway train carriage without difficulty, almost beat Four Arms in a tug of war match, and briefly restrain Ultimate Humungousaur. The armor also provides Carl protection against damage.

The suit can be equipped with jet boosters that are used for flight or increased speed.

The gauntlets' palms can harness yellow energy for projection of blasts or for stronger punches. The beams are adjustable for narrow or destructive emission.

A gauntlet has a hidden grappling hook launcher for restraining opponents.

After his upgrade in which he boosted the core, Carl displayed much greater strength, speed and durability, as well as projecting red energy blasts from his palms. However, as a side effect, the armor grew hotter each time he used it, and according to Kevin, the suit would have blown up and killed him if Water Hazard hadn't saved him from it.

Captain Nemesis's armor was later upgraded by Billy Billions, giving him the ability to fly with rocket boots, shoot orange lasers and bolos out of his wrist cannons, and he can also fire missiles out of his shoulders.[3]

Because of his selfishness, Carl will work with anyone as long as it serves his purposes, and will abandon them when the situation turns against him.

Carl's armor can be overpowered by an opponent more stronger or powerful than it is, such as when Four Arms beat Carl at tug of war and when Ultimate Humungousaur easily defeated him.

Though upgraded, Carl's armor is vulnerable to Brainstorm's electrokinetic shocks and will short-out with a blast to the chest plate.

Captain Nemesis appears on Ben's second trip to Rome, where he reveals that he was the one spying on Ben and leaking battle footage of him to Will Harangue. Nemesis is angry at him that Ben once again one-upped him. When fighting Ben, Nemesis powers himself up by using the piece of the Potis Altiare that Enoch used. After Ben defeats him, Nemesis collapses from exhaustion.

Captain Nemesis serves as the mini-boss of the Colosseum level. He is a pretty easy opponent. Nemesis attacks by firing lasers and melee attacks. While some of his attacks cannot be blocked, they are all avoidable. Overall, dodge his attacks and keep attacking until he is defeated. The easiest way to beat him is to turn into NRG, and continuously blast him with a radiation beam. As Captain Nemesis takes damage, pieces of his armor will fall off.