Carl is a human/ghost that first appears in Scared Silly.

In his human form, he has gray hair, wears blue jeans, a black tank-top, a green sleeveless jacket, and a fishing hat.

In his ghost form, he resembles a floating 1800s-era diving suit. However, his diving suit is just a disguise to hide his identity, and surrounds his being with a spectral aura. 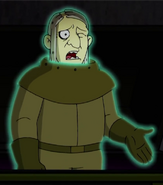 Carl's ghost form without a helmet

Carl is Karl w/a K's twin brother. After his brother dabbled in dark magic, he ended up turning himself into a monster and Carl into a ghost. Ever since, he tried to warn others not to stay in Karl's hotel, knowing that his brother would eat them.

In his ghost shape, he can levitate and create a spear. He has shown great aptitude with using it, and has enough strength to wrestle with Karl, who was able to toss Wildvine with ease.

Despite him being a ghost, he is not intangible, meaning physical attacks will be able to affect him.