Captain Shaw is a fisherman who believes in the existence of the Krakken.

Captain Shaw has greyish-green hair on both the sides of his head as well sideburns. His chin is stubbled. He is wearing a regular tan fisher jacket and olive pants. He has a red baseball cap with a tan rectangle on it. 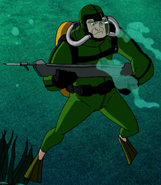 Despite being depicted as "crazy" he still makes a living by giving rides on his boat and fishing opportunities. While he seems obsessed with getting the Krakken, he chose to save Ben rather than kill it.

He was first seen in The Krakken, where he took Ben and Max on a fishing trip. After Ben mentions the Krakken, Shaw takes them to a spot where he thinks it will appear. However, the spot is fenced off by the Friends of Fish. Shaw wants to go through the fences but then Jonah Melville and his crew appears and asks him to turn back. As they are heading back, one of Shaw's radars goes off. The Krakken suddenly appears and attacks the people on the dock before going for Melville and his men. Ben fights the Krakken as XLR8 and saves the people and the Friends of Fish. After XLR8 reverts to Ben while running on the water, Max tells Shaw to help Ben, forcing Shaw, who was about to shoot the Krakken with a harpoon gun, to spare her.

After Melville shut down the whole lake he still doesn't give up and sails to the lake once again. Ben sneaks up to the ship too. Shaw and Ben dive into the lake and notice a Krakken egg. Shaw swims up to the surface and gets taken by Melville, who knocks him out and his his crew blow up Shaw's boat. Ben turns into Stinkfly and after a fight he manages to save Shaw.

When the team goes after Melville he follows them in a rowboat and ends up catching Ripjaws in a net. He tells Max that he finally got a Krakken, but as soon as he says this, the Omnitrix times out, leaving Ben in the net and Shaw puzzled.

Shaw is seen again fishing in a small lake in Monster Weather.