Cannonbolt is a hulking, broad-shouldered alien covered in natural, yellow armor plating on his back, shoulders, and the backs of his arms. He is predominantly white, with black on his upper half. He also has four white claws protruding from both of his paws. He has green eyes and considerably small, yet sharp teeth. Cannonbolt wears the Omnitrix symbol on his chest.

In Don't Laze Me, Bro, Cannonbolt wore black boots with two horizontal glowing pink lines on each one and a purple and pink wig on his head. He also had black horizontal lines under his eyes, four lime green star-shaped tattoos on the armor plating covering the back of his arms and a smaller yellow one on his forehead.

Max as Cannonbolt looks roughly similar to Ben's, only he has Max's hair on his forehead and a bloated potbelly stature. Due to Max assuming this form while inside the Omnitrix, the device's symbol is absent on his body.

In Ben Gen 10, Max as Cannonbolt looks the same as before, except his eyes glowed red due to being under Hex's control. 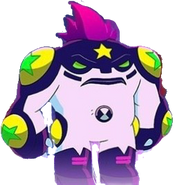 Cannonbolt in Don't Laze Me, Bro

Cannonbolt as a balloon in Dreamtime 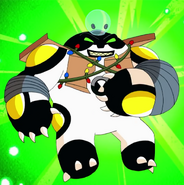 Max as Cannonbolt in Ben Gen 10 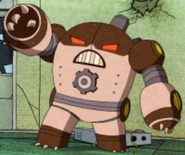 Cannonbolt can curl into a ball, encasing himself in his plating. When rolled up, he becomes like a motorized wheel that can move at great speed and can increase his rotational momentum to slam into and/or run over enemies.

In his sphere form, Cannonbolt can ricochet and bounce off surfaces. He can even increase his agility by quickly opening up his ball shape while airborne. In this form, he is invulnerable.

Cannonbolt seems to be capable of perceiving his surroundings despite his eyes being covered and encased inside his sphere form. The fur on his body acts much like cat whiskers, registering shifts in air and motion around him. Between that and his excellent hearing, Cannonbolt receives something akin to echolocation, giving him "eyeless" vision.[DR 1]

Cannonbolt's strength and reflexes are at a level comparable to Kinecelerans, as shown when he caught Rush by his fists before the latter could punch him.[2]

Despite his top heavy body, Cannonbolt has enhanced balance, allowing him to quickly change in and out of sphere form to suit his immediate needs.

Cannonbolt has enhanced dexterity, being able to hold Rex while preventing Bobo from breaking his grip.[3]

Cannonbolt's shell is rather durable, being able to deflect lasers. It also makes him resistant to acids and lava.

Cannonbolt's stomach is big enough for him to eat big portions of food.[4]

When angry, Cannonbolt's scream can be very loud and can be heard from a distance.[3]

When falling from a certain height, Cannonbolt can make big splashes.

Cannonbolt is subjected to the physical laws of reflection and conservation of momentum, meaning that he has difficulty stopping or controlling his direction if he picks up speed.

Cannonbolt's bipedal form is top-heavy, making him very unbalanced and clumsy, though he can still manage to use his curled shape to enhance his agility.

Cannonbolt cannot roll on sand or slippery surfaces, the latter of which has been demonstrated with Wreckingbolt.[7]

Cannonbolt can be affected by Nanny Nightmare's Baby Powder, as demonstrated with Wreckingbolt.[2]

Cannonbolt can be too heavy to stand on certain things that are unstable, such as a diving board.[8]

There is a limit to Cannonbolt's durability and stamina, as a punch from a Celestialsapien was able to knock him out.[9]

Cannonbolt is a playable alien character in the game.

Cannonbolt is used in the opening cutscene to battle Zombozo, but is quickly defeated.

Cannonbolt, along with Heatblast and Four Arms are the only aliens available on Ben's arsenal at the beginning of the game.

Cannonbolt is able to curl into a ball, encasing himself in his plating and launching himself from ramps to cross long gaps.

Cannonbolt's Ultimate Ability consists of him aiming at enemies, then charging in ball form towards them.

Cannonbolt is vital for progression on the The Funhouse and the The Hive levels of the game.