Cannonbolt is a hulking, broad-shouldered alien covered in natural, yellow armor plating on his back, shoulders, and the backs of his arms. He is mostly white with black on his upper half and has four claws on both of his hands.

When Cannonbolt turns into a sphere, he rolls up into a ball, with his backplates and the plates on his hands covering him. His sphere form has semi-circular stripes across his body, with black lines around the circular plates, and his side plates are the plates on his shoulders.

In the original series, Cannonbolt had sharp teeth, yellow eyes, and wore the original Omnitrix symbol on his forehead.

In Alien Force and Ultimate Alien, Cannonbolt's teeth became fuller and human-like teeth, the black stripe on his chest was gone, his eyes were recolored green, and he wore the original Omnitrix/Ultimatrix symbol on his chest.

In Omniverse, Cannonbolt regains his black stripe from the original series returns, which now goes down to his belly/chest. His eyes are no longer connected to his shoulders, his palms are now flat instead of bulging, the yellow bolts on his body are now hexagonal and there are three plates on his back instead of two.

Ben 10,000's Cannonbolt looked similar to his 10-year-old self, but with a different color scheme for the legs, which sported a black pants-like design. His claws were longer and outlined in grey, his eyes were closer to his shoulder armor, and the Omnitrix symbol was higher up, being on the top of his head rather than his forehead.

Gwen 10 as Cannonbolt looks similar to Rollaway, albeit the markings on her eyes are upturned, similar to an eyeliner. She has feminine lips, freckles, a hair clip on her left side, pink eyes and a cat symbol-shaped Omnitrix on her chest. Her skin is lavender, while her bolts and lips are purple. She has black markings on her torso and pelvis in a similar design to a bikini. Her bolts are also smaller than Ben's Cannonbolt and Rollaway. 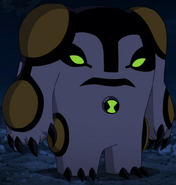 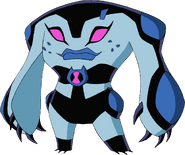 Cannonbolt can curl into a ball, encasing himself in his plating. In general, the Arburian Pelarota species mostly used this maneuver for defense, like an armadillo. However, since Ben did not know about this when discovering Cannonbolt, he weaponized Cannonbolt's originally defensive capabilities.

When rolled up, Cannonbolt becomes like a motorized wheel that can move at great speed (because of chemicals in his exo-plates that reduce friction)[pop-up 1][1] and can increase his rotational momentum to slam into and/or run over enemies.

Cannonbolt can ricochet and bounce off surfaces like a pinball in sphere form, suffering little-to-no loss in momentum.

Cannonbolt can use his sphere form to increase his agility by quickly opening up his ball shape while airborne, create shockwaves, and spin into a fierce tornado.

Cannonbolt seems to be capable of perceiving his surroundings despite his eyes being covered and encased inside his sphere form.

Despite his top-heavy body, Cannonbolt has enhanced reaction time, reflexes, dexterity, and balance, allowing him to quickly change in and out of ball form to suit his immediate needs.

Cannonbolt possesses enhanced strength, being able to fight on par with enemies about his size.[2] He can also break free from traps made of Lepidopterran slime.[3]

From inside his shell, Cannonbolt can withstand twice the heat of reentry into the Earth's atmosphere.[pop-up 2][4] Similarly, his shell is resistant to acids and lava.[5]

Cannonbolt's shell can deflect lasers, even when not in sphere form.[6] Because of this, he is practically invincible when curled into a ball.

Cannonbolt is capable of withstanding the vacuum of space, but he still needs to breathe. Without an oxygen-supply, Cannonbolt is limited to holding his breath.[7]

Cannonbolt is able to be empowered by electrical abilities, such as those of a Gimlinopithecus. That way, he can gain much more power and momentum when in sphere form.[8]

Cannonbolt's bipedal form is top-heavy, making him very unbalanced and clumsy. This is because Arburian Pelarotas are made to spin, not walk.[pop-up 3][1] However, he can still manage to use his sphere form to enhance his agility.

Cannonbolt's large body makes it hard for him to move in small spaces, such as in vehicles like the Proto-TRUK.[7]

Cannonbolt can emit some sort of odor, which people housed in his spheroid form can find repulsive.[6][9]

Cannonbolt can be held in place by strong adhesives, such as those used by the Stalker,[10] as well as beings with as much or more strength than a Chimera Sui Generis.

Cannonbolt cannot roll on slippery surfaces, such puddles of a Murk Gourmand's slime.[11]

Despite his shell being resistant to extreme heat while reentering Earth's atmosphere, Cannonbolt can still suffer a mild amount pain from the force of impact.[4][8]

Cannonbolt has a weakness against magic, as shown when he was constrained by Addwaitya.[12]

He has the Dark Heroes and the DNA Force skin. Cannonbolt is needed for defeating the Snap Dragon.

Cannonbolt can curl into a ball to encase himself in his plating, turning into a sphere. He can then use this form to roll into enemies to attack. In addition to the average repelling of walls, he was capable of ricocheting off enemies as well.

By compressing himself tightly, Cannonbolt can release the pressure to create a sonic blast.

Cannonbolt can flop onto the ground to create a shockwave, as well as rotate quickly to generate a miniature tornado.

Due to the Omnitrix rebooting after Ben's abuse of the quick-change feature during his battle with an animated Mr. Smoothy mascot, Cannonbolt, along with Swampfire, Big Chill, Spidermonkey, and Humungousaur were the only aliens available on Ben's arsenal upon his arrival on Vulpin.

Superball is an unlockable combo move for Cannonbolt.

Cannonbolt is a playable alien in the game (by both 11-year-old and 16-year-old Ben).

He is one of the aliens used by 10-year-old Ben.

Retrieved from "https://ben10.fandom.com/wiki/Cannonbolt_(Classic)?oldid=980343"
Community content is available under CC-BY-SA unless otherwise noted.