In her human form, Camille has auburn hair tied in a single bun. She has blue eyes and wears a light pink tank top, khaki pants, a silver necklace and pink flats.

During the wedding ceremony, she wore a white wedding dress.

In her humanoid Lenopan form, Camille has purple skin, light purple eyes and long hair. She also has two pairs of antennae each sticking out of her face. 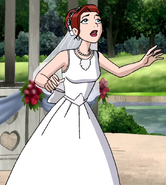 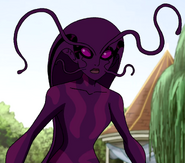 Camille's body is made out of a purple mud-like substance with shapeshifting properties, such as turning into a human being. Other abilities include elasticity, the ability to shape her body parts into anything, and super strength.

When Joel was fighting in the war between the Plumbers and the Lenopans, he met Camille Mann. Later they planned to be married, not only to declare peace and end the long feud but because they truly loved each other. Camille's parents did not like this, so they attacked the wedding along with Camille's Ex-Boyfriend. But Heatblast, Gwen's spells and Grandpa Max's weapons defeated them. Even Joel's Parents were against this marriage but they later realized how unfairly they treated Camille. Joel and Camille were then happily married.