View source
watch 01:23
Wiki Targeted (Entertainment)
Do you like this video?
Play Sound

Buzzshock's appearance is similar to an Earth dry cell. He is black with green eyes, a large lightning bolt-like stripe spanning from where his neck starts to where his legs start on his front and back sides, and a positive (+) symbol and negative (-) symbol on his back.

In the original series, Buzzshock's lightning bolt stripe was white, he had a hole on his head that could release electricity, and his original Omnitrix symbol is located on his chest.

In Ultimate Alien, Buzzshock looked mostly the same as he did in the original series, except the hole on his head was replaced with a grey spot (making him better resemble a battery) and his Ultimatrix symbol was recolored green.

In Omniverse, Buzzshock has two bolts on each arm, the lightning bolt stripe is recolored green, and the top of his head is now shaped like a battery, with the top colored light green. His head is now more prominent, as his chin actually sticks out rather than being a part of a long, one-piece body, and his eyes are now almond-shaped instead of being circular. He wears the Omnitrix symbol on the top of his head.

Bad Ben as Buzzshock looks identical to Ben Prime's Buzzshock in Omniverse, save for all the green parts being recolored mint green. 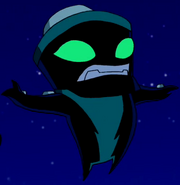 Buzzshock always laughs whenever he moves around or fighting. He has a twisted sense of humor, as he laughed hysterically when Enoch was sucked out of a plane.[1]

Buzzshock has the ability to manipulate green[note 1] electricity, and can pass through any electrical source using a form of enhanced speed.[3][4]

Buzzshock can control electricity and can inhabit electrical devices, controlling them from the inside, and in some cases powering them. However, he can also cause electrical technology to malfunction and fry when he passes through them. He can animate and possess electrical machines as a result.[3]

Buzzshock has the capability to duplicate himself when he is severed, more specifically when he is cut in half or has enough power, as demonstrated by other Nosedeenians.[3] However, he must first learn how and train himself in order to do it.[MW 1]

Unlike other Nosedeenians, Buzzshock's speech is understandable to other races.[5]

Buzzshock has enhanced agility, as shown when he jumped over Phil when he attacked him and landed on both feet.[5]

Buzzshock can electrify liquids, such as a Sphoeroid's slime, to attack enemies.[6]

Buzzshock can use his powers to seamlessly fly, leaving an electric trail behind.[2][7]

Buzzshock is surprisingly strong for his size, being able to lift a human at least by their underwear.[3]

Buzzshock is durable enough to withstand being harmed by one of SevenSeven's energy blasts.[8] His natural durability can be increased by his self-duplication, allowing him to be uninjured if he is severed (as demonstrated by other Nosedeenians), as he simply can duplicate to avoid being harmed.[3]

Buzzshock can emit a sonic scream capable of shattering glass, as demonstrated by other Nosedeenians.[3]

Buzzshock's power can be taken away by fire, or when he is trapped in something made of a non-conductive material, as demonstrated with other Nosedeenians.[3]

Like any other organic being, Buzzshock can be banished back to his own timeline by a Chronosapien.[2]

Despite his enhanced durability, Buzzshock can still be incapacitated by enemy attacks.[8]

If Buzzshock runs out of energy, he will fall asleep, as demonstrated with other Nosedeenians.[9]

Buzzshock's energy can be absorbed by a species such as Conductoids, as demonstrated with other Nosedeenians.[9]

Buzzshock's small size can be a disadvantage against a bigger, stronger opponent like Phil.[5]

Buzzshock's name is a combination of the words "buzz" and "shock", referencing his electrical abilities.