Bubble Helmet is a pink caterpillar-like alien wearing a life-support power armor. The armor is mainly silver except the torso which is black with purple accents. He wears purple gloves and has three sharp claws on each of his hands. He has a prominent blue round helmet.

As a half Gimlinopithecus, he looks nothing like before and has the appearance of a regular, male Gimlinopithecus. He is blue, with pink eyes and light blue horns. His extremities got bulkier and he doesn't wear his helmet anymore. 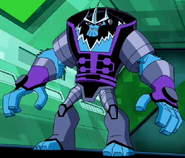 Bubble Helmet as a half Gimlinopithecus

At some point, Bubble Helmet was imprisoned in the Null Void for shoplifting a 30,000,000 Tayden item.[DJW 2]

In The More Things Change: Part 1, he debuted alongside Liam and Fistina.

In The More Things Change: Part 2, he fought with Ben and Rook on train tracks in Undertown.

In Outbreak, he became a hybridized with Gimlinopithecus DNA (mixed with the base DNA of his own species) for the duration of the episode as a result of a malfunction with the Omnitrix.

He made a cameo in Special Delivery where he was one of the many villains at Psyphon's auction.

In The Vengers he tried to rob Mr. Baumann's shop and was defeated by the Vengers but in reality he was secretly working for them.

In Universe vs. Tennyson, he was freed by Chadzmuth from his cell along with Sunder.

Bubble Helmet's main weapon is his armor which allows him to have movable legs and arms. The armor also has a built-in jetpack and allows him to stretch his extremities. Bubble Helmet has two staffs that can be swung around and can shoot lasers, as well as a laser gun.

Bubble Helmet cannot live on a planet like Earth without life support and will have trouble breathing without it.[1]

When Bubble Helmet was half Gimlinopithecus, if he got insulated, he couldn't use his electrokinesis.