Blukic is a character in Omniverse. He and Driba are the Plumber tech support for the Plumber base on Earth.[DJW 1]

Blukic is thinner and taller than an average Galvan and wears overalls with a Plumber belt. He is slightly cross-eyed, and he is sometimes seen wearing a pair of safety goggles. He also wears a cap.

Blukic in his early days as a Plumber 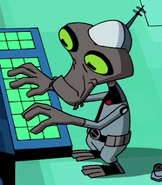 Blukic five years prior to Omniverse

Blukic in a protective green suit

Blukic in his riding outfit 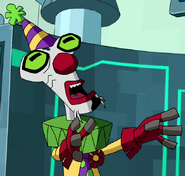 Blukic as a zombie clown

His mannerisms are somewhat reminiscent of a country bumpkin. One quirk about his personality is the fact that he always contradicts whatever Driba says. Blukic shares with his associate a slightly arrogant overconfidence in his Galvan intellect, which occasionally causes him and Driba to disregard the opinions of others. He has developed a taste for Mr. Smoothy, though his favorite flavor is 'metallic.'[2]

Apparently, Blukic and Driba were once part of the Level 1 Science Team, and Blukic has no intention of ever going back to telling simpletons of how to turn off their computers, then turn them back on again.[3]

Blukic and Driba have known each other since childhood.[4] They have also been acquainted-and smitten-with a female Galvan named Luhley since this time, and have constantly competed over her affections. They ended up on Earth after mistakenly launching Luhley's spacecraft with a Galvanian Skeuomorph intended to stop Benevelon and his B.L.R.R.T. from destroying Earth. After being captured and taken to Area 51 by Colonel Rozum, they teamed up with a young Max Tennyson and succeeded in burying the B.L.R.R.T., which prompted Benevelon to retreat and await another opportunity to attack the Earth.

Blukic and Driba are the Plumber technicians for the new underground Plumber base on Earth in Bellwood. However, they were actually employed by the Plumbers at least five years prior to the Omniverse series, as shown in Evil's Encore.

In Trouble Helix, Blukic and Driba were testing a weapon on Chromastone.

In Evil's Encore, Blukic inadvertently foiled Dr. Animo's latest plan by eating the Technobug he was using in his escape attempt from prison.

In Arrested Development, Blukic and Driba reveal they have no idea how to reverse the De-Ager Ray's effect.

In Store 23, Blukic and Driba look for the 23rd Mr. Smoothy with Ben, but end up in Dimension 23. They try to repair Blarney T. Hokestar's machine, but can't until Azmuth tells them how.

Blukic has all the physical advantages and disadvantages of a normal Galvan. Being small allows Blukic to go inside machinery and into places that larger beings cannot. However, this does not make him suitable for combat and therefore, he must out-think his opponents in order to win.

Blukic is not intelligent by Galvan standards; however, he and Driba were able to repair the Omnitrix,[5] and the Annihilargh.[6]

Blukic is capable of doing complicated tasks, but has problems with deciphering a map.[3]

Blukic has demonstrated impressive on-the-fly improvisation when the situation demands it. Some examples include rewiring Trumbipulor's robots to attack each other[3], using a simple button cell battery to create a device to fool a high-tech surveillance system, and using brute force with a wrench to bypass a computer's security codes.

Blukic's name is based on the director of some Ben 10 episodes, Butch Lukic.[DJW 3]