Blitzwolfer's appearance is based on a werewolf.

In the original series, Blitzwolfer had grey fur, a long flowing mane, and a large bushy tail with three sharp claws on each hand and foot, and the inside of his mouth was green. He has spiked elbows and shoulders and wore a white jumpsuit with black stripes and the original Omnitrix symbol on his lower stomach.

During the events of Benwolf, however, Ben was slowly transforming into Blitzwolfer. During the first stage, Blitzwolfer mostly resembled Ben but with bushy sideburns, sharp claws on his feet and hands, sharp teeth, longer hair, and grey skin. The original Omnitrix symbol was worn on his left arm, much like when Ben is in human form.

During the second stage, Blitzwolfer's face started to appear more wolf-like. His nose became more noticeable with light grey fur surrounding his nose and mouth, and dark grey fur on areas of his face where the light grey wasn't. His eyes also went full green and his ears became pointed and pointing upward. He also gained height and muscle, and his arms and legs resembled his fully transformed form.

During the third and final stage, Blitzwolfer resembled his fully transformed form but had Ben's clothing. By this stage, the original Omnitrix symbol had vanished from his left arm.

In Ultimate Alien, Blitzwolfer looked the same as before except his mane and tail were recolored black, he had lighter skin, and his mouth was colored white on the outside and red on the inside. He retained the same black and white jumpsuit from the original series and wore the Ultimatrix symbol on his chest.

In Omniverse, 16-year-old Blitzwolfer has a green suit, collar and green wristbands. He now has four claws instead of three, as well as a green tongue and a white belt. His Omnitrix symbol is located on the collar above his fur.

11-year-old Blitzwolfer in Omniverse looks almost the same as his 16-year-old self, except his suit and collar are white with black stripes and his wristbands are black. 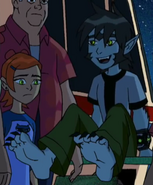 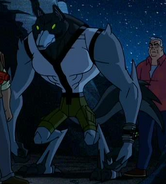 Blitzwolfer can emit a powerful green ultrasonic howl by opening his quadra-hinged muzzle that can either reflect incoming projectiles[1] or propel himself upward like a rocket booster.[2] His sonic howls are powerful enough to damage Petrosapiens, which was demonstrated by Kevin 11,000.[3] They also exceed the screaming capabilities of Sonorosians.[DR 1]

Blitzwolfer has enhanced senses of smelling and hearing, giving him great tracking and detection abilities.

Blitzwolfer possesses enhanced strength, as he was able to carry Gwen and Kai, and then Max and Wes without difficulty.[2]

Blitzwolfer possesses enhanced durability, as shown when he fought a Jungle Guardian and was only slightly fazed after getting blasted back into a tree.[4]

Blitzwolfer can jump exceptionally high, as he was able to leap up to the top of Nyancy Chan's huge ball of pink yarn while chasing her.[5]

Blitzwolfer has enhanced agility and reflexes, as seen when he fought the Forever Ninja on Big Ben.[1] He also possesses enhanced speed and stamina.

Much like an ordinary wolf, Blitzwolfer has sharp fangs and formidable claws, the latter of which he used to scratch the Jungle Guardian.[4] He also has extraordinary night vision.[2][DJW 1]

Similar to Wildmutt and Kickin Hawk, the claws on Blitzwolfer's feet are prehensile.[1]

Like all Anur System aliens, Blitzwolfer is immune to the effects of Corrodium, as demonstrated by the Werewolf.[6]

In addition to his feet, Blitzwolfer's tail is also prehensile, and he can use it to suppress fire, as demonstrated by Scout.[7]

Similar to most Earth canines, Blitzwolfer has sensitive hearing. Therefore, he cannot handle loud noises like that of giant bells[1] or sonic howls of other Loboans.[DJW 2]

Blitzwolfer has a durability limit, as he got a headache after crashing into a tree.[4]

Blitzwolfer cannot use his sonic howl if his muzzle is forced shut by something, such as Thep Khufans' bandages or a Plumbers' specialized mouth cover, as demonstrated by the Werewolf.[8]

His placeholder name, Benwolf, is a combination of the words "Ben" and "wolf". It is an allusion to Beowulf.

Blitzwolfer is a rearrangement of the CNN newscaster Wolf Blitzer's name. Ben renamed the transformation "Blitzwolfer" after briefly seeing Wolf Blitzer on television.[1]

"Blitzwolfer" is also a reference to both his werewolf-like form and his sonic howl's capability to blitz through its targets.