Big Chill is a humanoid, moth-like alien whose four wings and antenna can fold up into a hooded robe (much akin to a poncho), giving him the appearance of a phantom. He has a black body with cyan patches on his arms, shoulders, legs, the back of his wings, and the back of his neck that resemble ice chunks. Each patch has thick blue outlining except for the ones on his wings, which are outlined in black. There is also a black line that runs on the edge of the outer margin on the back of each wing.

On his torso are three plates: one resembling the chest, a shorter plate under the chest, and one resembling the stomach. On his face are blue cheeks and underjaw, a mouth that always shows bluish-white teeth, and large green eyes with dark green spots. The top of his head also sports a blue Y-shaped marking that extends over his scalp. He has three pointed fingers and a thumb on each hand, and two toes on each foot and a third toe-like extension on his ankles.

Big Chill wears the original Omnitrix symbol on his chest. 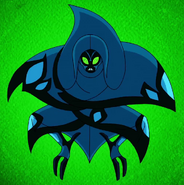 Big Chill is capable of breathing a wind or beam that reduces the temperature surrounding it, turns to ice constructs mid-air or upon touching a target, or encasing a target completely in ice. His breath can be as strong as wind.

Big Chill can fly using his wings, as well as levitate.

Big Chill has enhanced strength, as he was able to carry a Human while keeping steady flight.[1]

Big Chill is rather durable. Despite this, Big Chill prefers to use his intangibility to avoid being hurt.

Big Chill is quite agile, as he is capable of dodging attacks while flying.

Big Chill is immune to extreme temperatures, both hot and cold, as he was completely unfazed being touched by a Pyronite.[1]

There is a limit to Big Chill's durability, as a punch from a Celestialsapien was able to knock him out of the sky.[1]

Big Chill is vulnerable to the telekinetic abilities of a Celestialsapien.[1]

Big Chill is a common collectable figure in the Cartoon Network Arcade app.