Benjamin Kirby "Ben" Tennyson[2] was a normal ten-year-old kid until he found the Omnitrix, a powerful watch-like device that allows him to turn into ten different aliens. Though immature and clumsy, he uses the Omnitrix to stop evil, but that doesn't stop him from using it for his own personal needs. He is the titular main protagonist of Ben 10.

Ben wears a black and green shirt with the number 10 on the top left corner, dark green cargo shorts, blue boxer shorts, white socks, and black low profile sneakers. His eyes are green, and his hair is brown. He wears the Omnitrix around his left wrist.

During water-based activities, he wears a green swimsuit.

In The Ring Leader, he wore blue pants, a yellow cape and a goggles.

In The Sound and the Furry and Poles Apart, he wore a white hooded jacket with green stripes on both arms and brown pants, similar to his teenage counterpart in Ben 10: Omniverse.

In Ye Olde Laser Duel, Ben had to wear old clothes during his loss to Steam Smythe.

In Dreamtime, he wore green pajamas.

When riding in a Rustbuggy, he wears a green and black helmet.

In Crossover Nexus, he is depicted in the art style of OK K.O. Let's Be Heroes!.

In Moor Fogg, Ben wore a green raincoat while in Scotland.

In Beach Heads, he wore black and green swimming shirt and blue-green swimsuit.

In LaGrange Muraille, he wore a blue hat.

In Buggin' the Buggs, he wore a blue swimsuit and two colored eyeglasses, as well as a white bathrobe and facial mask.

In Which Watch, he wore a blue spacesuit.

In Four by Four, Ben wore a lazer tag vest.

In Cirque-Us, he wore green tuxedo with yellow-green ribbon.

In Prey or Play, he wore black tuxedo with green ribbon, magician hat, and a monocle.

In Wheels of Fortune, Ben wore a Sumo slammers T-shirt before it was stolen by Kevin.

In You Remind Me of Someone, he wore an orange T-shirt with green stripes and a green shorts.

In Steam Fight at the OK Corral, Ben wore a cowboy Hat.

In I Don't Like You, Ben wore a Chef hat during his Junk food video.

In his story in Tales from the Omnitrix, he was muscular and he wore green clothes with a dark green hoodie and cape.

In The Hex Factor, Ben wore a black tuxedo, with a green tie.

In Ben 10 Versus the Universe: The Movie, he wore green, gray, and white Omni-Naut Armor with neon green lights.

Ben as a Kid In a flashback

6-year-old Ben in a flashback in The Clocktopus

Ben with a black and white shirt and sneakers, and green pants in a flashback in This One Goes to 11 and Introducing Kevin 11

Ben in The Ring Leader

Ben In All Wet

Ben in his racer outfit in Drive You Crazy

Ben in Don't Laze Me, Bro

ben in a Racoon outfit in Mayhem in Mascot 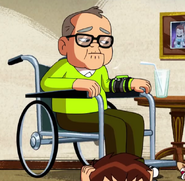 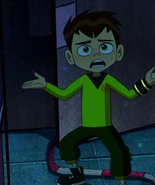 Ben In Assault on Pancake Palace

Ben with a white jacket

Ben with green pajamas in Dreamtime

Ben in his Rustbuggy outfit 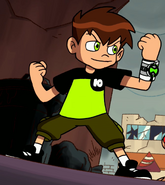 Ben in a Rain coat in Moor Fogg

Ben in Welcome to Zombozo-Zone!

Ben with a blue swimsuit in Buggin' the Buggs

Ben in a tuxedo in Prey or Play

Ben with a Sumo Slammers 2 T-shirt with a blue collar and sleeves.

Ben in You Remind Me of Someone

Ben in Steam Fight at the OK Corral

Ben with a Chef Hat in I Don't Like You 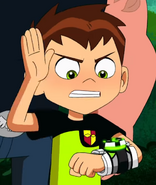 Ben in Tales from the Omnitrix with his hood

Ben in Tales from the Omnitrix without his hood

Ben in Growing Up Is Hard to Do

Ben in The Hex Factor

Ben is childish and cocky. He prefers likes to have fun rather than do chores such as cleaning.[4] He has admitted that he does not wash his t-shirt.[5]

Besides his childish behavior, Ben is heroic and caring, willing to help and save anyone in need. This also applies for his enemies, as demonstrated when saving LaGrange from dying in Yellowstone [6] and saving the Piscciss Volann Prisoner from a Null Void portal.[3]

Ben is not into nerd culture as much as Gwen, and usually teases her and geek culture. Despite his bratty and indifferent demeanor, Ben is, by far, anything but ignorant.

After Kevin Levin started bullying him, he apparently developed a fear of public restrooms. He was also unable to eat lunch at the school cafeteria for around 3 months.[7] This led to him developing a grudge against Kevin, which has amplified upon finding out that he has his own Omnitrix.

Ben can be very impulsive, as he often acts without considering his actions.[8] His reckless behavior often lands him in trouble.

Ben can get bored very easily, and is not good at math and science.

Ben does not always listen to Gwen, like when she told him Gax wasn't a good choice for Ben to turn into while the volcano was erupting. Instead of listening to her, he used Gax and stopped the volcano his own way.[9]

Ben's habit of screwing up often gets to the point where Max and Gwen would comment on it, even if he has not actually done anything wrong.[10]

Ben admits that he really is full of himself, that he is afraid of showing his feelings. He hides behind so many identities, and he believes that the only thing about him really worth anything is the Omnitrix, although he later ignores his current thoughts and focuses on the positive.[11]

Ben is willing to do anything to save his family, and planet. Even when Azmuth took the Omnitrix from him, he was still willing to go back to Earth and fight.[3]

Ben is a huge fan of Sumo Slammers.

Ben and Gwen have a pretty good relationship. They argue here and there but they always end up forgiving each other. At times, Ben finds her advise helpful, but often ignores it. Gwen sometimes partakes in Ben's mischievous behavior, such as when she played Ben's cornerman while they snuck out into a wrestling tournament.[12]

Ben and Gwen's arguments are sometimes over the littlest things, such as a cupcake.[13] Gwen sometimes does not stick up for Ben, such as when she refused to believe anything he said Frightwig until she saw her true colors for herself.[14]

Ben often takes credit for Gwen's work, even if it's not intentional.[15] She temporarily became a henchwoman for Zombozo because of this jealousy.[16]

Ben and Max almost have a father and son relationship. Max often gives Ben advice, but Ben is annoyed by it. Recently, Ben starts to accept the fact that his advice is helpful and he should listen to him more.[17]

Ben appears to be often annoyed at Penny. Penny cares for Ben's safety very much.

When Ben first met Simon, he thought he was very annoying. He soon yelled at him, causing Simon to react in rage. Simon was willing to crush Ben, but was stopped by his brother Ryan.[18] Since then, Ben has been working to be on better terms with Simon.

Phil is really nice to Ben due to his kind nature, however Ben seems often annoyed by Phil's work. When Phil helped fix the Omnitrix, Ben later stated that Phil didn't even do anything.[19] Ben alongside Gwen, don't really get excited in the presence of Phil.

Kevin used to be Ben's bully back when Ben was in fourth grade. His grudge has escaladed into a rivalry after discovering that Kevin has his own Omnitrix.[7] Despite that, Ben is willing to either help or save Kevin.[20]

Ben and Kevin have eventually become on better terms after working together to defeat Forever Knight, as they and LaGrange teamed up to unfreeze time using the Sonitrain. Ben has even stated that he is not as interested in fighting Kevin.[21]

Tetrax sees Ben as nothing but a bounty. He is often annoyed by his behavior, and thinks that he is only good for his bounty. Ben sees Tetrax as a "good-for-nothing bounty hunter".[3]

Vilgax is Ben's most dangerous enemy. Ben often gets on Vilgax's nerves. Vilgax would do almost anything to get the Omnitrix from Ben. Although, Ben has shown willingness to work with Vilgax. They both teamed up to stop the Fulmini invasion. However, Vilgax attempted to betray Ben.

Vilgax later returned to get revenge on Ben. After a fight, Vilgax spares Ben's life to let him witness the unleashing of the Ultimate Alien.[3]

Ben and Billy both have a rival relationship. Ben offers Billy to be friends with him, however, each time Billy turns down the offer.

Before Ben found the Omnitrix, he was actually a fan of Billy Billions.[22]

Steam Smythe is one of Ben's most reoccurring enemies. Steam Smythe often challenges Ben to duals. He made Ben humiliate himself after cheating in a laser tag dual. Over time Ben got bored of fighting him, and wanted more of a challenge.[3]

Hex finds Ben to be a complete nuisance, since he keeps thwarting his plans for domination, especially since he is a recent obstacle in his years of attempted conquering.

Kelly Turnbull compares Hex's feelings towards Ben to coming home and finding ants in your kitchen that you can't get rid of.[KT 1]

Ben seems to think of Dr. Animo as a coward, and says that he creates monsters to do his dirty work.

Ben is the wielder of the Omnitrix; A powerful device that allows Ben to transform into 10 different aliens with a variety of different skills and powers. However he is only limited to 10 aliens at a time. Later on his powers were given a boost in battle, the Omni-Enhanced Forms. Later on he lost this ability.

Whenever he is in the Nexus Realm, he can transform into Cartoon Network characters from across the multiverse.

He eventually found the Omni-Kix key, which gave him the ability to armor up his aliens. Soon Phil made a discovery that when the Key is inserted properly, he can access more power, Omni-Naut Armor.

When he equipped the Titan Gauntlets, he gained enhanced strength.

Whenever the Omnitrix times out, Ben is left powerless unless he switches into a new alien form. In addition to gaining the selected alien's powers, he gains its weaknesses. The Omnitrix also mistransforms at times, sometimes choosing an alien not fit for the situation.

Ben is allergic to animals. However, he's been taking medications.[23][24]

Ben is scared of anything with tentacles, including squids, snakes, and even Ectonurites.[3] The only instance he was courageous in their presence was whenever he turned into Gax.[25]

Ben is also scared of bees, which started when he got stung in the mouth by a bee he cluelessly tried to eat as a toddler. However, this does not apply to Queen Bee because she is more human than bee.[26]

Ben's impulsiveness can be exploited by his enemies, as the Forever Knight managed to manipulate Ben into making his family trust him less.[27][28]

Ben can easily get scared when he's all alone, such as he was transported into the Null Void.[3]

Ben is playable in every Ben 10 video game.

Ben is a common collectable figure in the Cartoon Network Arcade app, as well as his armored space suit.

Benjamin is a name from the Hebrew name בִּנְיָמִין (Binyamin) which means "son of the south" or "son of the right hand" going back into the Tanakh (called the Hebrew Bible by Christian scholars), a name of one of the sons of Jacob. His name, "Ben," is to create a rhyming effect between his first name and the number Ten. Also, his surname is a reference to 'Ten' of Ben 10.