Benjamin "Ben" Tennyson was an alternate version of Ben Tennyson.

Ben is a teenage version of his reboot counterpart with shaggy hair. He wears a black shirt that has a green stripe in the middle with a white 10 and green stripes on the sides of his shirt. He wears brown cargo pants with pockets at the knees and green and white shoes. He wears the Omnitrix on his left wrist.

At age 10 he looked exactly like his reboot counterpart, as briefly seen in the photo that Maximilian holds while he's traveling between dimensions. 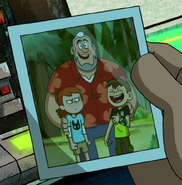 Like many of his counterparts, Ben was over-confident and cocky shown when he wanted to take on Alien X alone.

He referred to his grandfather by his name instead of as Grandpa, though his words were no less affectionate about the man as his counterparts.

One day Ben and his grandpa encountered Alien X in a town. Max, seeing how powerful Alien X was, asked Ben to warp away with him, but Ben decided to take on Alien X himself. Later on in a construction site, Ben is seen fighting Alien X as Four Arms, but is knocked away by the latter's telekinesis. Ben timed out and Alien X finishes him off.

Ben possessed the Omnitrix that allowed him to transform into aliens and use their powers and abilities.