In this guide, you will learn what images are allowed and what images aren't allowed. Only one low quality image is allowed per page, and they're only allowed in threads if there's no version with a higher quality.

All images must be from official Cartoon Network media (shows, games, toys, etc.) and must be related to the Ben 10 franchise. Fan art is prohibited and will be deleted whenever possible. Concept art is allowed.

The following images are examples of what's considered official images. 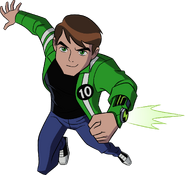 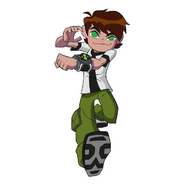 Screenshots are more than welcome as long as they're big and of high quality. DVDs and videos from iTunes are some of the best ways to get high quality images. All you need to do is make sure that your screenshots don't contain any unlicensed watermarks, that it at the very least has a decent quality, and that it has a reasonable size. It's preferred that all of your files have PNG (Portable Network Graphics) extensions, and not anything else because a PNG extension makes it so any image has its original quality in all areas of the wiki. Screenshots are recommended to be in 16:9 high definition and of the highest quality if possible. TV parental guidelines are permitted in television screenshots.

The PNG file extension is the only one allowed on this wiki. If you upload an image that doesn't have a PNG extension, you will be warned and then blocked if you continue to upload images without it.

These images are examples of what the Ben 10 Planet wiki considers to be bad and good quality images.

Renders are cut outs made from images. Renders made from screenshots of episodes or from gameplays are not allowed and will be deleted. Here are the examples below. 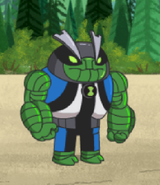 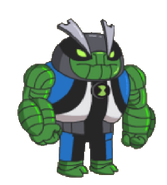 All screenshots here should have a 16:9 aspect ratio and be in high definition (or better) if possible. 4:3 images in good quality will be placed into their own section in galleries if there's a version of the image with a 16:9 aspect ratio.

Fan art is prohibited and will be deleted. Fan art in official merchandise is allowed if depicted on television or on the official websites. Sprites and other color edited art are examples of fan art and are not permitted. Fan Art made by crew members are to be in the appropriate gallery and not appear anywhere else on the Wiki without a disclaimer.

Images ought to only have an official or licensed trademark like Teletoon, Bandai, Cartoon Network or none at all. Unofficial trademarks from fan sites or users are prohibited and will be deleted.

So before uploading a(n) image(s) you come across or create, use good judgement. Make sure the image(s) are in good quality, canon, official, and reasonable in size.

Any user who uploads an image that is other than fan art that is deemed not kid friendly, gross, offensive, vulgar or any type of adult material not for kids will be blocked indefinitely with little to no prior warning.