Ben 10 is the fifth iteration of the Ben 10 franchise. It serves as a reboot to the television series and is loosely based upon the original series.

Building on the highly successful franchise about kid hero Ben Tennyson, Ben 10 introduces a re-imagined Ben, his cousin Gwen, and Grandpa Max are normal, as they travel the country during summer vacation. When Ben finds the Omnitrix, a mysterious watch that transforms him into 10 different friendly aliens, a world of extraterrestrial superpowers opens up to him. The series is produced by Cartoon Network Studios and created and executive produced by Man of Action Entertainment (Big Hero 6, Generator Rex), with John Fang (Mixels, Generator Rex) on board as supervising producer.[1]

Ben 10, along with other Cartoon Network shows, had a collaboration with Mighty Magiswords in the app "MagiMobile". It had Magiswords based on some of Ben's aliens for players to collect, including all the season 1 aliens

A Villainous short released on the Brazilian Cartoon Network YouTube channel features Flug analyzing Vilgax while Dementia tries using his advice on Black Hat. The short ends with Flug creating his own Omnitrix for Vilgax, who attempts to transform into Black Hat before being eaten by the form. It uses clips from Omni-Tricked: Part 3, Omni-Tricked: Part 4, Out to Launch, Animorphosis, The 11th Alien: Part 1, and The 11th Alien: Part 2. 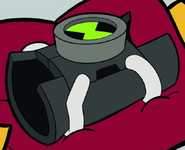 In the episode Ben Gen 10, Ben meets a young Generator Rex on the run from a hostile Providence working through a series of misunderstandings in order to save the world from being infected with alien DNA.

The Tennysons are attacked by a villainous dimension-hopping Omni-Alien only known as Alien X. With help from a parallel universe version of Max, they bring multiple Bens and Gwens together to form an alien hero army and combat this threat. Multiple Bens based off previous iterations appear in this special.

A video game based on the series was released worldwide on November 10, 2017 (for Microsoft Windows, Nintendo Switch, PlayStation 4, and Xbox One). It was developed by Outright Games and distributed by Bandai Namco in the EMEA. In the game, players discover aliens and use them to help Ben defeat three of his greatest enemies: Zombozo, Queen Bee, and the Weather Heads.

The openings of seasons 1-4 showed all 10 of Ben's current aliens posing next to a number. At the end of each opening, Team Tennyson do some sort of interaction with eachother.

The opening showed the majority of Ben's enemies, along with his current aliens at the time.

The opening showed Team Tennyson traveling around the world in the Rustbucket, while Ben cycles through all of his aliens.

The opening showed Ben showcasing all 10 of his current aliens, aside Max and Gwen. Towards the end, the silhouettes of Original Series Ben, Alien Force Ben, Ultimate Alien Ben, and Omniverse Ben are shown in their respective series order.