Pre-Production applies to every decision, character, and alien that were made before Ben 10 started.

In 2004, Steven E. Gordon created his first concepts of Ben Tennyson and the Omnitrix; however, back then, aliens weren't involved. Gordon's first batch of concepts involved Ben, the Omnitrix, and ten human superheroes.

Some time later, Gordon updated his concepts. The heroes would still remain mainly humanoid but they would look more like monsters, animals, and some of them, aliens.[SG 1]

In 2005, Dave Johnson became the art director for Season 1 and 2 of Ben 10. He took a different turn on the idea, and, with Man of Action, they made the heroes aliens. Most of Johnson's concepts were immediately approved with slight changes, but some of them had be changed drastically to convince Cartoon Network.

The Omnitrix was originally called the Megawatt (alternatively spelled "Megawhat"), short for Megadeoxyribonucleictransdimensionaltransforminalnumerator.[DR 1][pop-up 1] It would make Ben switch places with himself from across the Multiverse.[AC 1]

Ben is slightly taller than the finished version, with a different body type. He has red hair with a different haircut and wears a medium-sleeved, orange and white shirt with an orange collar. He has yellow eyes, black eyebrows and slightly pointed ears. He has a fair complexion and he almost looks pale. He has baggy, olive toned dark yellow pants with two huge pockets. He wears white shoes with that are light blue around the bottom and grey on the top and the sole.

Gwen was originally meant to be Ben's classmate, not his cousin.

This Omnitrix resembles more to an Earth watch. It has a grey case protected with a black material. The lugs are light and dark brown, the crystal is yellow and the crown is orange. It only has one big red hand that can be moved with the crown to select an alien out of the ten orange circles that take the places of the numbers. It also has two yellow buttons that have the same function as the green buttons on the finished version; raising and lowering the dial.

Unlike the finished versions, the pre-production aliens were all humanoids, based on classic superheroes. They all had one main power which was usually an element (fire, water, etc.) or a skill (intelligence, strength, etc.). With the exception of Greymatter, none of the aliens had a visible Omnitrix symbol.

Diamondhead originally was the first alien to be unlocked in the Omnitrix. 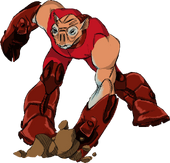 Digger was replaced by Wildmutt but his digging abilities weren't implemented in any of the original aliens, although they were later given to Ditto and Armodrillo.

Digger has a muscular, soft orange colored body. His eyes, lower jaw and the inner parts of his arm are colored light grey. He wears a sleeveless, red suit with dark red shielding material on its collar and his spine. He has three fingers and wears long, dark red gloves made of the same material as his collar. He also wears dark red knee pads and boots. He has a rather animalistic face with nasal cavities instead of a nose, pitch black eyes and long, standing ears. He appears to be winking since his eyes are used to the tunneling lifestyle. 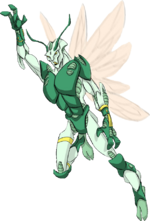 DragonFly is the pre-production version of the flying alien that was replaced with Stinkfly.

DragonFly has a well-built, humanoid body that is heavily armored with insectoid features. He has whitish-green skin with dark cyan armor all over his body. He has a chest plate, an abdomen pad, a jockstrap, shoulder pads, gloves and footguards. The armor is connected to his body with pale lime green appendages that give the impression of muscles. He has three fingers on each of his hands and two-toed feet. He has yellow accents on his body and armor as well as small, yellow eyes and a toothless, yellow mouth. His lower jaw connects to the back of his head and his nose and forehead are fused into each other. He has eight transparent, greyish-orange wings and two dark cyan antennae.

Ghostfreak is the pre-production version of the alien with the same name.

Ghostfreak has a humanoid body and wears a dark blue suit with orange gloves, mask and a cape. The suit has a light blue belt, accents and outsoles. His cape is orange on the outside and brown on the inside and it seems to be attached to his arms so it could be used for gliding. He has a sizable head with a giant grin and a small nose. His eyes are light blue and he has black, bushy eyebrows that divide into two. His mask has eleven tendrils that give the impression of hair.

Greymatter is the pre-production version of Grey Matter.

Greymatter is based on the stereotypical Area 51 alien as it has grey skin, a huge head with giant, pupilles eyes. He has nasal cavities instead of a nose and stripes on his neck. He wears a black full-body latex suit that covers everything up to his chest. His torso is remarkably small and it is only a half the length of his extremities. He has a small tail, four fingers and three toes, two on the front, one on the back.

He wears the Omnitrix on his left wrist. He is the only pre-production alien that has a visible Omnitrix symbol. It has the look of a long, orange wristband that has three yellow orbs, one big in the middle and two smaller at the ends. 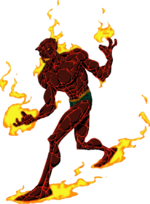 Inferno is the pre-production version of the fire alien that was replaced with Heatblast.

Inferno is a magma-based humanoid whose body is composed of a bright red inner magma body covered by a dark red rocks. As a fire-based entity, his body radiates high amounts of heat, due to this he can set any part of his body on fire. The cracks on his body are symmetrical and the fire his body produces is yellow and orange. He wears dark green briefs with a brown belt. He has four fingers on each of his hands and no toes. His eyes and mouth are hollow with fire burning inside them, thus somewhat giving him orange eyes and mouth. 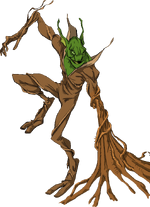 PlantGuy is the pre-production version of the plant alien that was replaced with Wildvine.

PlantGuy has an arboreal appearance. He has a green body that is seemingly covered with crust. His body has wrinkles, he lacks teeth and has a dark green tongue. His eyes are light green with black pupils. He has two long leaves coming out of the sides of his head, these leaves give the impression of ears. His crusty cover is wrapped over by multiple brown roots. He has five fingers that he can turn into roots and a long feet with two toes. He has a large, light brown collar raised up around his neck. 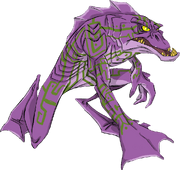 Razorjaws is the pre-production version of the aquatic alien that was replaced with Ripjaws.

Razorjaws resembles a bipedal crocodile but with major detail changes. His body is colored with two shades of purple, and has dark green hieroglyphs all over on it. He has a long dorsal fin stretching from the top of head head to the middle of his back. The fin gradually becomes lighter in color on the top. His arms aren't bulky but muscular while his legs are rather slender. He has three giant gills on both side of his face making it look wider than it actually is. He has two yellow, green-pupilled eyes on the front of his face, a back-folded nose and a huge underbite. He has yellow teeth randomly scattered in his mouth. 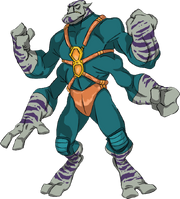 StrongGuy is the pre-production version of the strong alien that was replaced with Four Arms.

StrongGuy's most conspicuous feature is his four arms. He has a light grey body and wears a teal suit that reaches the middle of his limbs. The suit has teal knee pads, with a copper-colored jockstrap and six pipes that wrap around his shoulders and armpits. His face and arms have symmetrical, purple markings. He has three fingers on each of his hands and two toes. He apparently has no eyes or nose. He has a big chin and animalistic ears on the front of his face.

He seemingly wears the Omnitrix on the middle of his torso.

Upgrade is the pre-production version of the alien with the same name.

Upgrade has a yellow body with wrinkles and veins on his skin. He has a relatively small head for his size with green eyes and a toothless mouth. He has no nostrils and has opened ear canals. He has a massive forehead, dark yellow circles under his eyes and stripes on the top of his head. He has two light brown pipes on his head, two on his neck and three on each of his shoulders. He also has light brown knee, elbow and abdomen pads. He wears a brown and grey body armor and sports two metallic bolts on each of his fingers.

XLR8 is the pre-production version of the alien with the same name.

XLR8's body structure is almost indistinguishable from that of a human. He is entirely colored blue. He is fairly muscular and he has five nail-less fingers on each of his hands. His eyes have yellow sclerae and black pupils. He has sophisticated eyebrows, a sharp nose and defined cheekbones with some kind of gills on them. He has a sharp chin and long ears. He wears a brown, sleeveless suit with light brown boots and a black belt. Under the suit he has a black turtlenecked shirt. His suit on his shoulders and neck are enlarged. He wears a light brown cap with a brown frame.

Ben's earlier designs had different shirts and shorter hair but the overall design didn't change that much. The design which is closer the final with straighter hair is the look of Ben in the pilot screenshots

Four Arms' design was the first that got greenlit. The final design doesn't differ from the early sketches. Some of the prototypes had spikes on their necks.

Grey Matter's early versions were depicting him as a stereotypical alien. He wore the same suit but he had a differently shaped and bigger head with giant black eyes. He had the unfinished Omnitrix on his forehead on a black helmet that surrounded his head. Since this concept was deemed to be scary for kids, Johnson decided to go with a frog-like design instead.

The prototype of the finished design only had two toes and wore a lightly different suit.

Heatblast had to be re-designed a lot of times to get approved.

Most of the prototypes wore suits and had small volcanoes on their arms, shoulders and head instead of being fully magma-based. The Omnitrix was originally on the left side of the suit with a black line running through it. His facemask lacked facial features and had weird, symmetrical shapes instead of eyes, a nose or a mouth. However, this design wouldn't appeal to kids so it had to be made more kid-friendly. The finished version didn't have the volcanoes but those were later put on the adult Heatblast.

Stinkfly's early sketches got vetoed and Dave Johnson had to go with a design that he hated and was harder to animate as well.

The original Stinkfly was supposed to be a combination of various insects such as roaches, bees and flies. Some of the sketches were depicting his as a bipedal, yet airborne creature. He originally had two legs and two, sometimes three pair of arms instead of four legs and two arms. Some of the prototypes had eight eyes, some of them had two giant insectoid eyes, there was even one with confluent fly-like eyes. Most of them had a chitin shield protecting their wings.