Upgrade AW1: Crisis on Galvan B

Azmuth is the creator of the Omnitrix and a renowned scientist throughout the known universe who created numerous inventions.

Azmuth is an elderly Galvan, approximately 5 inches tall. He resembles an anthropomorphic grey frog, with gills and sticky skin. He has bulbous green eyes with rectangular black pupils and eyelids that open and close horizontally. Two thin tendrils grow out of his lower jaw, while two longer ones grow out of his upper jaw, giving him the appearance of having a beard.

In the Alien Worlds shorts, he wore a helmet on his head and armor over his regular green tunic.

In Ben 10 Versus the Universe: The Movie, Azmuth's outfit is changed to something resembling a vagabond, his sleeves tattered and his arms wrapped in bandages, though he retains his helmet. His upper jaw tendrils are longer whereas his lower jaw tendrils are shorter.

In his youth, his jaw tendrils were very tiny, his eyes were orange, and he wore a white and green robe and pants. 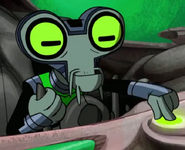 Azmuth at the time of the creation of the Galvanic Mechamorphs.

When Azmuth was young, he was adored by all. He never cared of his actions and what consequences they may have brought. However, he was working on a device that could bring unity in the Universe.

After Azmuth was imprisoned in the Null Void for Vilgax's past actions, he thought he deserved to be there. When he met Ben he underestimated him quickly, thinking a human shouldn't be trusted with his life work. After learning that Ben is willing to do anything to save his family he gives him the chance to prove himself.

Azmuth first saw Ben as a reckless, foolish human, who didn't deserve to wield his Omnitrix. However Azmuth gave Ben a trial, to prove his worth. After seeing Ben save the Piscciss Volann Prisoner, he allowed Ben to leave and save his planet even after Ben had technically lost the trial.

Azmuth is greatly respected by Milleous. He is grateful for his help in repairing his ship and bringing Vilgax to justice.

Azmuth was once Vilgax's teacher and friend, the two of them worked together to create the Omnitrix. However, he was betrayed by Vilgax who misused the Omnitrix as a weapon. Years later Azmuth helped the Incurseans take his former friend into galactic custody for his various crimes.

In Upgrade AW1: Crisis on Galvan B, Azmuth himself appeared in a history lesson, where it was revealed that he was involved in Galvan B's transformation and the creation of the Galvanic Mechamorphs.

In Ben 10 Versus the Universe: The Movie, Azmuth is shown to be the creator of the Omnitrix alongside Vilgax. When Vilgax took a darker path, Azmuth had to absorb half of Vilgax's being into the Omnitrix and hid the device away to what he considered the most unintelligent planet in the Universe: Earth. Because he was the indirect cause of the destruction Vilgax brought, and because he secretly created the Omnitrix, which others viewed as an unsanctioned weapon, he was exiled to the Null Void.[DR 2]

Years later, Azmuth hired Tetrax to retrieve the Omnitrix from Ben. Tetrax testified against the Omnitrix's wearer Ben in a galactic court so that Ben is banished to the Null Void in order to retrieve the Omnitrix. He ordered the Ectonurite Prisoner and other inmates to back off so he can meet Ben. After reverting him as both Four Arms and Omni-Naut Heatblast, Azmuth was disappointed to learn that Vilgax was beaten by a mere child and telekinetically removed the Omnitrix from Ben before explaining its creation to him. Intrigued by Ben's willingness to fight Vilgax without the Omnitrix, he gave Ben a trial to prove his worthiness of the Omnitrix. The trial was for Ben to reach the end of a trap-filled tunnel before a timer on the Omnitrix runs out. He taught Ben how to change the aliens in his roster.

Although Ben failed the trial due to saving the Piscciss Volann Prisoner from getting sucked into a portal as Goop, Azmuth was impressed by Ben's altruism and allowed him more time so that he may save his family. Azmuth activated a device that opened a portal out of the Null Void, which Omni-Naut Shock Rock expanded the size of using his powers. When asked why he did not use his to escape from the Null Void all along, Azmuth replied stating that it was where he belonged. As Omni-Naut Shock Rock left, he told Azmuth that he believes people can change.

Azmuth eventually left the Null Void and was seen watching Ben's battle against Vilgax alongside Milleous and the Incurseans from their ship. Contacting Ben through the Omnitrix, Azmuth reminded him of his teachings, which convinced him to use Way Big against Alien V. After Alien V's defeat, Azmuth removed the Omnitrix from Ben's wrist and used it to return Vilgax to normal before allowing Ben to keep the Omnitrix a little while longer. Azmuth then left Earth along with the Incurseans, taking Vilgax into galactic custody.

Even by the super-intelligent Galvan standards, Azmuth's mental prowess is considered worlds apart from the rest of his race.

Along with his intelligence, Azmuth is gifted with years of experience and knowledge.

Azmuth is a skilled inventor, having created numerous inventions, his greatest being the Omnitrix.

As the co-creator of the Omnitrix, Azmuth has exact knowledge on its every function.

Azmuth has telepathic control of the Omnitrix, able to easily remove it from whoever currently wears it.

Azmuth possesses some sort of telekinesis, demonstrated when he levitated a tea pot and cup.

Azmuth possesses a device that can create a portal to and from the Null Void.

Azmuth, like the rest of his species, is small and can be easily hurt when out in the open or when defenseless.

Azmuth narrates all of the Alien World short videos, describing the planets, the populace and in some cases their history to the audience.