Scientist
Advisor To The Plumbers
Inventor

Ben 10: Secret of the Omnitrix

Azmuth is the creator of the Omnitrix, along with numerous other inventions and creations. He is a Galvan from the planet Galvan Prime. Azmuth's scientific creations and achievements have made him a very respected scientist throughout the universe. Professor Paradox calls him the smartest being in the universe, but Azmuth demurred, saying he is the smartest being in three (arguably five) galaxies. He is also a trusted advisor to the Plumbers, though he has no authority over them.[DM 1]

Azmuth is an elderly Galvan, approximately 5 inches tall. He resembles an anthropomorphic grey frog, with gills and sticky skin. He has bulbous eyes with rectangular black pupils and eyelids that open and close horizontally. Four thin tendrils grow out of his lower jaw, while two longer ones grow out of his upper jaw, giving him the appearance of having a beard.

In the flashbacks in Solitary Alignment, the tendrils on his upper jaw were shorter and he only had two tendrils growing out of his lower jaw. He also wore a shorter tunic that stopped at his legs.

In the original series, Azmuth wore a dark green jumpsuit, with a lighter green Intergalactic Symbol of Peace logo on his chest. Bronze colored platings covered the base of his neck, shoulders and wrists. A belt of the same color surrounded his waist and he had yellowish-green eyes.

In Alien Force and Ultimate Alien, Azmuth wore a green Galvan tunic with black sleeves and a black stripe running down his chest and abdomen with a black belt surrounding his waist. The platings were colored silver and covered more of his neck, shoulders and wrists, as well as his legs and feet, leaving his toes exposed. His eyes were light green and also appeared smaller, as if squinting in a human manner.

In Omniverse, Azmuth had minimal changes. He now possessed two additional tendrils on each side of his head, as well as two liver spots on the right side of his face and two more above his right eye. The skin around his eyes was now colored black, his facial tendrils and neck were slightly longer and the black belt around his waist was replaced by silver plating.

Azmuth in the Solitary Alignment flashbacks

Azmuth in his space suit 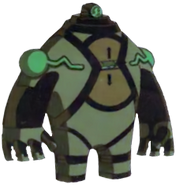 Azmuth in Destroy All Aliens

Azmuth with the Omnitrix

Azmuth was very paranoid, as evidenced by the amount of work he put into hiding his home from the rest of the universe. He was a bit impolite. He originally refused to repair the Omnitrix in Secret of the Omnitrix, and was willing to let the universe get destroyed.

Azmuth was very pessimistic, unwilling to shut down the Omnitrix's self-destruct at first, despite it meaning the destruction of the universe. The reason why is that he simply didn't believe the universe was worth saving. This is because he invented the Omnitrix so the aliens of the universe would have a better understanding of each other, but other people like Vilgax only wanted to use it as a weapon of war.

In Alien Force, Azmuth has become less pessimistic and more serious, showing a no-nonsense personality in War of the Worlds. This is especially apparent in Map of Infinity, where he was dealing with a disaster of intergalactic proportions, and when the universe or galaxy is being threatened. This time around, throughout the series and its sequels, he is concerned about the safety of the universe and his planet, Galvan Prime. This is seen when he gets angry at Ben Tennyson for losing the Omnitrix to "the most dangerous being in the universe"[3], as well as not being able to retrieve the pieces of the Map of Infinity.[4] He also spent considerable time mixing into the Galvan society as well as developing the complete defence system of Galvan Mark II.[5]

Even by the super-intelligent Galvan standards, Azmuth's mental prowess is considered worlds apart from the rest of his race. He is well-regarded as the smartest being in the universe (or at least 3 to 5 galaxies). He is often referred to by his Galvan peers as "First Thinker."

Along with his intelligence, Azmuth is gifted with years of experience and knowledge.

Azmuth is a skilled inventor, having created numerous inventions, his greatest being the Omnitrix.

Because he created the Omnitrix, Azmuth knows all about its functions so he has the potential to use any model of the Omnitrix more effectively than anyone else. Azmuth once used the Omnitrix to fight Vilgax, though only for a short time.[6]

Azmuth always thinks ahead on possible scenarios whenever one of his inventions has possible qualities for usage by evil. This was most prominently displayed by the fact that he made a device that could permanently disable Omnitrix technology.

Azmuth once used a robotic suit that he wore when he first encountered Ben. He also uses a slew other gadgets he designed himself.

Although he is the Omnitrix's creator, Azmuth has been shown to have less skill fighting with it than Ben. Azmuth attributes this to being "a little out of practice."

Despite being the smartest being in three (arguably five) galaxies, Azmuth can be reckless at times, and does not at times plan ahead. In his own words, "Contingency plans? Who has time to worry about that nonsense?"

Like all Galvans, his small size makes him physically vulnerable to larger foes.

Azmuth appears as a non-playable character in the game. He fixes the Omnitrix error and, at the end, he gives Ben extra DNA.

Azmuth helps Ben throughout the game. He gives Ben the alien Bullfrag by scanning the Incurseans.