Doctor Aloysius James Animo is one of Ben's enemies, a mad scientist obsessed with genetic experiments on humans and animals.

In the first two seasons, Dr. Animo shared the same design as his Classic Timeline counterpart. He has pale yellow skin and white hair.

As of The Chupaca-bro, Animo has mutated himself into a chimera humanoid with upper body and arms of an ape, frog legs, and a fish fin on his back. He wears a red glass dome helmet with wire/tubs attached on it connected to the mechanical belt. The belt has three circle bolts above a red hexagon. He has metal wristbands and one bolt on each shoulder.

When he absorbed essence from goats, he grew horns with gill-like markings on his collar bone, horns on the back, claws on his ape fingers, monstrous goat legs and a long tail with small spikes at the tip of the tail.

In Chicken In Chichen Itza, Part 1: Pyramid Scheme, he gave himself six transparent dark red bat wings on his back, three on the left and three on the right.

Animo without his hat and goggles 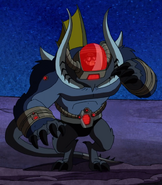 Animo after absorbing goat essence in The Chupaca-bro 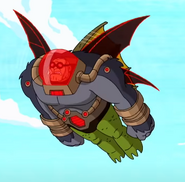 Animo as a mutant in The Beast Inside

Dr. Animo is stereotypically an insane mad scientist with delusions of grandeur. His aim in life is to live up to his father's legacy.

Animo was a failed scientist in the 1960's. He concerns to receive a trophy for Best Scientist, but lost to another scientist. Some point afterwards, he established a farm where his Accidentals work. This was also ran by his Alphas.

At some point in the beginning of the summer, Animo encountered the Tennyson family.

In Something I Ate, Animo leads Slurpstack to a collect all of the gold in a museum. His drone eventually gets eaten. After the Slurpstack is defeated, Animo's drone confronts the Tennyson family, only to be crushed by an angry Gwen.

In The Beast Inside,

In Omni-Tricked: Part 1, Animo sent his Terramite to activate Mount Megalodon, so he can hold the city ransom. However his creature was defeated by Ben.

In Animorphosis, Animo teams up with Vilgax to extract DNA from the Omnitrix. After Animo uses his gun to collect the DNA, Vilgax double-crosses him. Animo is forced to team up with Ben to stop him. In Animo's lab, Animo uses his DNA gun to transform into an alien to fight Vilgax. He transforms into an Appoplexian and helps Ben fight off Vilgax before the lab blows up. Vilgax gets away, but Animo attempts to destroy Ben only to transform back, leaving him and Ben stranded on a mountain.

In Chicken Nuggets of Wisdom,

In Rekoil, Animo took control of King Koil and attacked a pet center. He soon looses control over him, and is chased out.

Animo is a genius and brilliant scientist, skilled in both machines and genetic experiments. He originally used a "transmutator ray" that mutated animals which he could use for his errands, including Napoleon, Madcow, Boxer Wolfen Sheep, and Slurpstack.

After seeing Ben Tennyson and his Omnitrix, he created the "Animerger" (which he considered his greatest invention) that mutates humans with animal DNA. However, it was destroyed by Ben.

While in the form of an Appoplexian, Animo shared many of the same powers as Rath.[3] Since then, he has gained access to Ben's alien DNA.[DR 1]

In his current chimera body, Animo possesses enhanced strength and agility at the same level of a gorilla. He can also breath underwater thanks to his amphibian parts.

Recently, Animo has gained the ability of flight thanks to his bat wings.

Animo has been known to miscalculations, as some of his mutated animals turned out weak and useless including Nugget, Minitaur, Goatadactyl, and Chinzilla.

Animo's chimera body makes it harder for him to fit through human-sized spaces.[4]

Dr. Animo is a villain in the game.

His name comes from the word 'animal' as his powers are animal-related.