View source
watch 01:32
She-Hulk Trailer Dropped - The Loop
Do you like this video?
Play Sound

Where the Magic Happens

Addwaitya is a Geochelone Aerio who mastered magic thousands of years ago. He is an evil mystic being, considered to be the most powerful sorcerer in the universe.

Addwaitya is a turtle-like creature with pink mana fire-like energy surrounding his head. Unlike normal Geochelone Aerio, Addwaitya does not have flipper-like arms.

In Enemy of My Frenemy, the flames around Addwaitya's head have disappeared and his head has turned the same color as the rest of his body.

In Omniverse, his appearance is slightly altered, with his head now being surrounded by a new necklace with long horns. His head is also wider with his nostrils larger and now has pink tinges around the edges. He wears red armbands with yellow cuffs at the top and bottom. He has donned a red belt with yellow cuffs, fitted with a bull skull in the middle. Beneath the skull is a small, red loincloth. 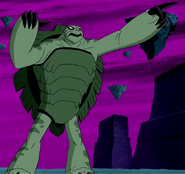 Once Addwaitya got his hands on the Alpha Rune, its power corrupted him to the point to where he believed all things living "steals" mana from him.

As of Omniverse, he is bitter from his past defeats, even more so at how helpless he is in Charmcaster's Bag, but during the time he spent in there he proved to be very manipulative, as he gave advice to Charmcaster that seemed helpful, but would ultimately fail, leading to his eventual escape from her bag.

Sometime later, Addwaitya got his hands on the Alpha Rune, an exceedingly powerful magical item (which was actually a piece of the Map of Infinity in disguise) and reached the interdimensional world of Legerdomain. He got corrupted by the immense magical power the artifact possesses.

The inhabitants of Legerdomain, though most of them were very powerful sorcerers and sorceresses, were unable to defeat him, and their leader, Spellbinder, was forced to send his brother, Hex, and his daughter, Charmcaster, to Earth in order to keep them safe. While he did that, Addwaitya murdered him and took control of Legerdomain. He had also enslaved most of the people of Legerdomain to do his bidding.

In Escape from Aggregor, Addwaitya was briefly mentioned by Galapagus. Addwaitya was first seen in Where the Magic Happens, when Ultimate Aggregor reached Legerdomain in order to get his hand on the Alpha Rune. Chasing him, Ben, Kevin and Gwen were forced to ask for Charmcaster's help in order to reach Legerdomain. When the group arrived, Addwaitya immediately felt their presence and attacked them. Addwaitya also used Spellbinder's voice to encourage Charmcaster to fall to her death (though the team stopped Charmcaster from doing so). When they got to Addwaitya's citadel, a Pallorfang attacked them and died after falling off the edge of the land. After a feral fight, Addwaitya was surprised by an attack from Ultimate Humungousaur, allowing Ultimate Aggregor to knock him out with a sneak attack and escape with the Alpha Rune. Legerdomain then started falling apart and Charmcaster, seeing Addwaitya weakened, chose to stay behind to fight him and save her people.

In Enemy of My Frenemy, Ben, Gwen, and Kevin, having returned to Legerdomain to save Charmcaster, stumble across Addwaitya, who is magically bound to a stone formation while his magic is being drained by a nearby crystal. After destroying the crystal, he is magically handcuffed by Gwen and questioned on what had happened to him. Addwaitya claims this was done to him by a "usurper," but does not disclose the individual's name. They then decide to bring him with them to reach the "usurper". On their way there, they stopped at a waterfall. With Ben and company distracted, Addwaitya used his magic to dissipate Gwen's mana handcuffs and cast a spell on the water, turning it into a giant water monster, while he went to fight the "usurper". The usurper turned out to be Charmcaster, wielding the Alpha Rune. Addwaitya attempted to attack her, but was no match against her with the Alpha Rune, and has his soul sucked out of him for her machine. When her spell is later reversed and all the souls of Legerdomain are returned to their bodies, Addwaitya is revived as well.

In The Ultimate Enemy: Part 2, Addwaitya was seen in a flashback.

He has a short appearance talking to Charmcaster in Charmed, I'm Sure. He has been turned into a totem along with Darkstar and is kept in Charmcaster's bag. Charmcaster is listening to his advice concerning her plans, but is still confident that she is in control of him, although Addwaitya manages to manipulate her. His conversation with Charmcaster made Ben, Rook, and the others think she's crazy.

In Charm School, though Addwaitya made no on-screen appearance, Charmcaster talks to him while he is in her bag.

In Third Time's a Charm, Addwaitya, along with Darkstar, Hex, and Gwen, are freed from Charmcaster's Bag. After begrudgingly congratulating Gwen on her magic, Addwaitya teleports away.

Addwaitya is incredibly strong when he has the Alpha Rune, with Charmcaster claiming him to be the most powerful sorcerer in the universe. Capable of casting spells without saying them, he easily defeated Gwen, Charmcaster, and Kevin. He was even capable of fighting Ultimate Humungousaur without being defeated.

Addwaitya retains his normal Geochelone Aerio powers, even though he lacks holes on his torso.[DM 1]

As a Geochelone Aerio, Addwaitya has all the standard weaknesses of his species, though he has less of a blind spot due to the position of his head in comparison.

Though the Alpha Rune did grant him great magical power, it made him extremely irrational and violent.

Without the Alpha Rune, his spellcasting is greatly reduced. While he was in his stone-figure form, he was even more helpless and at Charmcaster's mercy, though he was able to manipulate her, albeit in a more subtle fashion, giving her advice that seemed helpful but ultimately lead to her defeat and his escape.

Addwaitya is named after a male Aldabra Giant Tortoise from Alipore Zoological Garden, India, that lived to be 255 years old and was believed to be the longest-living animal in the world. It is also a Sanskrit word "advitya" that means "something which is second to none".