Sure Ben thinks Kickin' Hawk is his favorite combatant (I don't know why), but Rath is my obvious choice.

He's stronger, tougher and almost indestructible plus his anger won't allow him to give up. And he can slice opponents with ease with his claws. Can rival Four Arms and has big potential in general.

Most of Ben's powerful aliens were no match for Vilgax since he's too OP.

Kickin' Hawk's speed isn't enough to stop Rath and he only fights by kicking and grabbing stuff, that is all and Rath can avoid his body spinning as well by jumping high and far. In terms of number of physical abilities, he isn't even close to Rath at all. Most of the enemies he had fought, he wasn't even being to seriously and he didn't have a hard time against a weakling like Manny and Manny got his butt on a planter the brutal way after he underestimated Rath.

>Rath: wrestling pro, is way stronger and can lift heavy objects several times his size, is fast, can jump very high and is also very agile and way more durable.

>Kickin' Hawk: fights using his feet most of the time, can grab, body spin and is very fast and agile. His only main advantages against Rath are his speed and agility. His simple weakness is that his claws are not suited for fine-manipulation, as he was unable to work a cellphone. And Rath's advantages are also Kickin' Hawk's disadvantages. Plus, you also don't have proof that AF Rath is afraid of water.

Rath's anger is not always his disadvantage, it motivates him to fight stronger and not give up till the end.

Rath has way more wins on his account and Kickin' Hawk only has a few.

I have already explained about his weaknesses to you but seriously, I see no point in explaining this anymore to you since you are clearly a major Kickin' Hawk fan who will just stay by their stuff whatsoever. Putting Rath below him is a mistake since he is on par with Four Arms, one of the most powerful OS aliens.

Even the heavier rats were thrown much far when Kickin Hawk kicked them. He is just like Bruce Lee, His speed is faster than Rath because no one can throw those rats just by kicking them as those legs might not be having enough mass. So, the force was produced due to the acceleration which proves that his speed is more than Rath. Even Rath was getting punched a lot by Manny, so what would happen to him if he would face Kickin Hawk.

Com'on the most important thing is that Rath is afraid of water, now even if I would dare to fight against Rath with a bucket of water in my right hand and a pipe through which water is running in my right hand. Rath can be dealed by Kickin Hawk easily.

Rath's brain is hardwired for aggression and as such, Rath's only known weakness is his lack of intelligence and highly aggressive temperament. This causes Rath to become easily distracted and difficult to stop once he starts fighting. He is also not quite adept for diplomatic approaches, particularly negotiations, and can make bad or difficult situations worse.

While Kickin Hawk is able to kick an object with enough force equivalent to a cannonball. He also has enhanced strength, durability, agility and reflexes. His legs have surprising flexibility and dexterity as he is able to reach out and grab objects much like an arm. His kicks can generate powerful shockwaves which sends his enemies flying.

Kickin Hawk also battled Vilgax but he got less time in Vilgax Must Croak.

>Kickin' Hawk's only advantages against Rath are martial skills, speed and flexibility and he's smarter.

>Rath's advantage against Kickin' Hawk is physical strength, high jumping and extreme durability, wrestling skills. He is basically Hulk. While he has limited intelligence, he isn't completely stupid but is just brawns-over-brains type of fighter. If he was really stupid, he wouldn't have achieved/completed anything at all; in order to know how to fight and complete missions, you have to have intelligence and Rath doesn't lack it completely. He can be distracted for a moment but that doesn't mean that he will go down so easily due to his stamina and durability.

>As I said, reboot Rath is not afraid of water, Omniverse Rath is afraid of water but we don't know whether AF/UA Rath is or isn't (though aquaphobia for him is logically BS since tigers aren't supposed to fear it but love it). Probably depends on the version, though Kickin' Hawk wouldn't know about that weakness during them fighting.

>Kickin Hawk may able to kick away his opponents via body spin, though the enenies weren't so tough either.

>Rath's anger pro/con depends on the level of its use, it can make him either stronger or it can make him reckless. Provided, he won't let himself lose as his species solely live for wars and fighting.

*Rats in "Bros in Space" weren't so tough and big for him to be kicked with no effort though. Rath could do that too since he is also very strong.

*He didn't do much against a physically strong opponent like V.V. Argost and he wasn't fighting him alone, lol.

*He lost to Attea unlike Rath.

*He had a chance to kick Vilgax because Vilgax's hands were tied together, also Vilgax isn't so OP like he used to be in AF/UA.

*He quickly lost to Kevin and they only had a physical combat fight.

*He may have fought the Vreedles by showing his skills and speed but Rath can do the same.

*In "Rook Tales" he quickly lost to that skinny alien dude (he didn't seem so strong but had skills) by having been tricked and then having been kicked into the water.

Kickin' Hawk's kick may be quite impressive enough to kick Charmcaster in her dragon form but Rath has enough strength to lift and throw large stuff with little to no effort. So yea, I don't think Rath would have a hard time against Kickin' Hawk, lol.

I still vote for Kickin Hawk because he is more powerful, quick and intelligent than Rath.

More powerful? Ya, sure (lol).

Of course! Ever heard about Bruce Lee? He is powerful because he is fast. People got thrown by his single touch. Same should go with Kickin Hawk.

Secondly, Rath is a dumb over his strength. He would forget his own name and start arguing with his tail (I know he doesn't have that, so he would argue that why he don't have that ROFL😂) while Kickin Hawk would be kicking him and Rath would have been throwing far until that.

Sounds funny but no.

Kickin' Hawk isn't as tough as Bruce Lee since he kept losing to weakass enemies in some of his fights plus he didn't appear and fight much in general. His speed and kicking skills wouldn't do much against Rath either since Rath's made of tough stuff and can do the same (jumping, kicking, speed and agility) and he's not that dumb; provided and focused, he won't get distracted easily. Underestimating Rath by overestimating Kickin' Hawk doesn't do much explanation here.

For instance, Four Arms is also very skilled, can jump very high, has superhuman strength, agility, tremendous endurance and he's considered by many to be among the best close-range fighting aliens, and yet Rath is shown below that he can rival him. Seriously, there is no point in arguing anymore.

You can support Kickin' Hawk all you want, it's ok. To each their own. 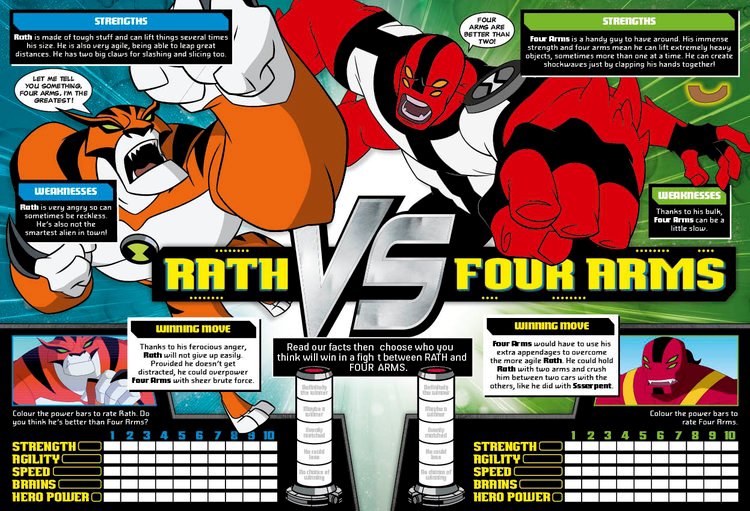 Oh that's a toughy. Like Bruce Lee vs Chuck Norris. Ultimately Rath because he's just so much more aggressive